Nashville is widely accepted as one of the coolest cities in America. Known most commonly as “Music City U.S.A.”, Nashville is also a food and drink lover destination not to be missed. I recently had the pleasure of making my first trip down there for a good friend’s bachelor party and one stop on our inebriated adventure included a trip to a distillery that self-identifies as “Hand Crafted Small Batch Ultra Premium Booze for Badasses”. Of course our Uber driver didn’t know this moniker so after half an hour of driving around in circles with us yelling “Badass 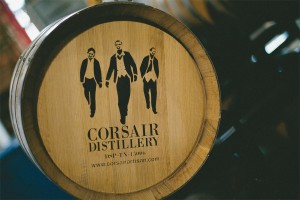 Booze!” he realized we must be talking about the Corsair Distillery.

Although we tried numerous delightful beverages before, during and after the tour, I became enamored with one particular spirit they produce, and decided to pick up a bottle to bring back to New York City.

The Corsair Triple Smoke is a very unique concoction that combines 3 distinct flavors that arise from individual malts smoked in separate grains; hence the name Triple Smoke. Here is a description in their own words: 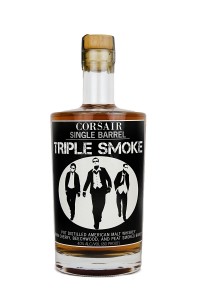 “WE TAKE THREE FRACTIONS OF MALTED BARLEY, EACH SMOKED BY A DIFFERENT FUEL – CHERRY WOOD, PEAT, AND BEECHWOOD – TO CRAFT THIS DEEPLY COMPLEX WHISKEY. POT DISTILLED THEN BARRELED IN NEW CHARRED OAK, TRIPLE SMOKE HAS THE SWEETNESS AND BARREL NOTES OF AN AMERICAN WHISKEY AND A SINGLE MALT’S RICH SMOKE, BROADENED BY TONES OF CHERRY AND BEECH.”

Although there are tons of d

istilleries out there scrambling to combine new ingredients and methods to craft something new for the sake of being new, to see a spirit come together first-hand and produce seemingly opposite notes and flavors that build upon one another is impressive (even for someone in the midst of a bachelor party haze).

Pick yourself up a bottle of Triple Smoke or any of Corsair’s other whiskeys, gins or even absinthe. And for those out there with a deeper curiosity about the alternative distiller process, find yourself a copy of Alt Whiskeys by Corsair founder, owner and distiller Derek Bell.

corsair, made in america, Made in Tennessee, made in usa, the thread, Whiskey, whisky